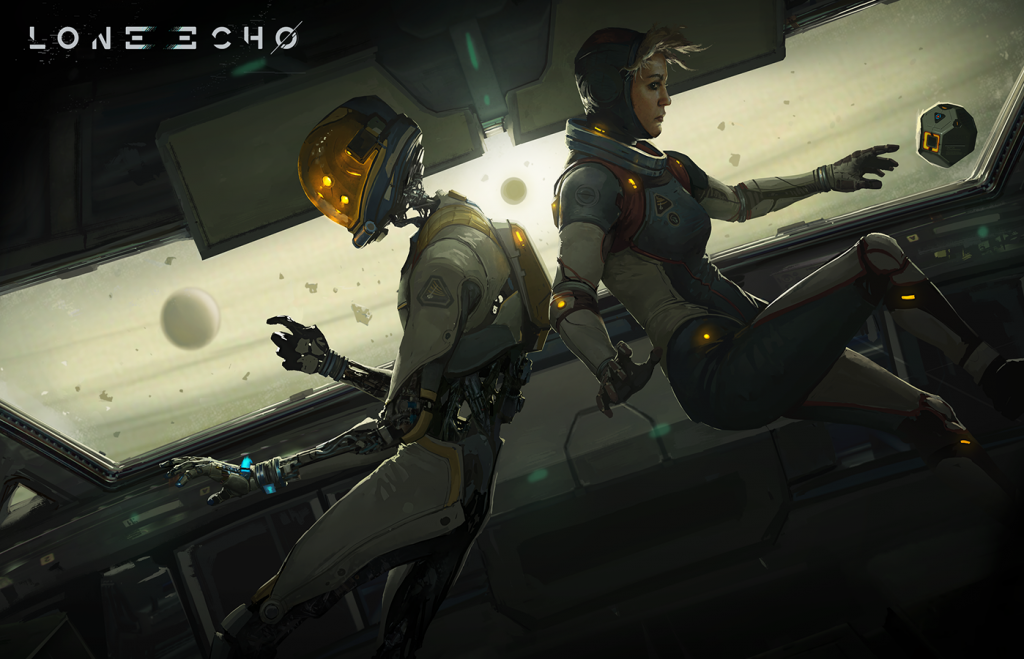 Ok, so this weekend Lone Echo was released on Oculus.  And oh man it is amazing.  There has been a lack of games in VR that have both the production values and writing of an AAA title, because for the most part developers have been testing the waters and releasing more experimental works, rather than fully fledged games.

Lone Echo changes that.  The writing, the voice acting, the graphics, the interface – everything has the polish that you’d expect from an AAA title.

In it, you play the part of a robot – the ‘Echo’ unit of the title – named (by your human colleague) Jack.  You assist the only other human resident of a mining facility in the rings of Saturn.  The entire game is in zero gravity, which lends itself to the VR medium very well, and the means of getting around – grabbing on to anything and pushing or pulling yourself along, using little hand jets, or later an EVA backpack, use all the benefits that having a head mounted display and hand controllers give you.  In fact, they’ve got the locomotion down so well that there was never a feeling of nausea that can sometimes occur when having free movement in VR.  The immersion is so good, that there were two or three occasions where I had to stop myself from falling over (even though I was standing completely still!) as my brain was totally convinced that I was in free-fall.

Gameplay-wise, the game is a comfortable play.  Probably best to be played standing, but I can see no reason (other than your available space) why it couldn’t be played sitting down.  I did find that while standing I had to adjust my position occasionally because you forget that your feet are actually touching the ground and start to hurt accordingly, as you habitually rock slightly on them in response to things happening in game.

The story is good, the writing and voice acting are all done to a high standard.  The graphics, usually a let down due to the high graphics requirements of the medium itself, are in this case beautiful, there is no stuttering, the textures are for the most part high resolution and unpixellated.

The only minor niggles I have, and they are minor, is that it is sometimes difficult to identify what your next objective is, as (not sure whether this a bug or intentional) the objective marker sometimes doesn’t appear, meaning a lot of floating around looking for something that flashes.  I found this most towards the closing sections of the game, but that could be because the developers assumed that I’d know what I was looking for by then!  Oh, and there’s a couple of bits towards the end which can make you want to throw your controllers with frustration, but even then you want to dive immediately back in and try again.

I have never played a VR game that made me feel so immersed in a fully realised and functioning world.

Well worth a purchase and I thoroughly recommend.