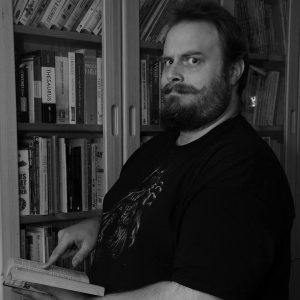 Me. Sorry.  Moustache, beard and hairline may vary.

My name is Jon Tuttle and I’ve been making 3D things since somewhere around the turn of the century.

From architectural visualisation, to editorial animation, at some point in the last 20 years or so I’ve done it.

My work has been featured in the pages of 3D World magazine (on two occasions, no less) and also in the art book ‘Exposé 10’ published by Ballistic Publishing.

I was contracted to model some popular London landmarks which were printed on and used to promote the Dremel Idea Builder 3D Printer when it launched in the UK a few of years ago.  Oh, and I also did a tiny blink-and-you’ll-miss-it bit of work on a 3D printed part for a set of the wristblades used in the Assassins Creed film.

In addition to my 3D work, I have also developed applications for the Oculus Rift and most recently the Microsoft Hololens.  I am a VR and 3D printing enthusiast (it says it at the top of the page), and am excited to be able to offer these services as well as my normal 3D work.

I also am not a fan of writing ‘about me’ pages, because that would imply that I know who I actually am.